This year, Ciena marathon ambassadors participated in 14th edition of Delhi Half Marathon sponsored by Airtel, our one of Ciena’s biggest customers. 21st October witnessed an incredible experience with a flock of more than 25 members of the Ciena family participating for the noble cause to support Bharti foundation in their mission of “creating and supporting programs that bring about sustainable changes through education and use of technology.”

The Airtel Delhi Half Marathon supports the idea of ‘Run for a Cause’, giving runners the opportunity to make their run meaningful by choosing a cause they believe in. It also lends an opportunity to all Civil Society Organizations - CSOs/ NGOs to raise friends and therefore raise funds.

Over 16,000 people participated in the Great Delhi Run category, a 6-km run where individuals and organizations like us participate to raise money for various charity causes. This year, there were members of 94 corporate offices and several dozen NGOs, who took part in the run, many of them running in bright and unusual costumes that highlighted issues like air pollution and road safety.

The Ciena Cares team used the marathon to focus on the noble cause of social responsibility, a mission of Bharti foundation which is actively promoted by Airtel.

Bharti Foundation is the philanthropic arm of Bharti Enterprises, which conducts free programs in both primary and higher education for underprivileged children, with a focus on girl child. The Satya Bharti School Program, started in 2006, is the flagship program of Bharti Foundation. The foundation has been recognized by many societies and award committees for its corporate social responsibility programs. Some of them include the Global CSR Award, Asian CSR Award, The Indian Education Award 2011, and World Education Award 2011.

Ciena Cares is an important element of our Corporate Social Responsibility (CSR) Program, which positions us as a supplier of choice across the globe. Our local team demonstrated the same value, “run for a cause” to raise awareness for the mission to educate underprivileged children. This will ensure that young people of our country realize their potential and educated them and train in order to make them employable.

A small effort and care can change many lives, it’s an accomplishment and a bundle of joy that you get by sharing and create a story that can be overwhelming. 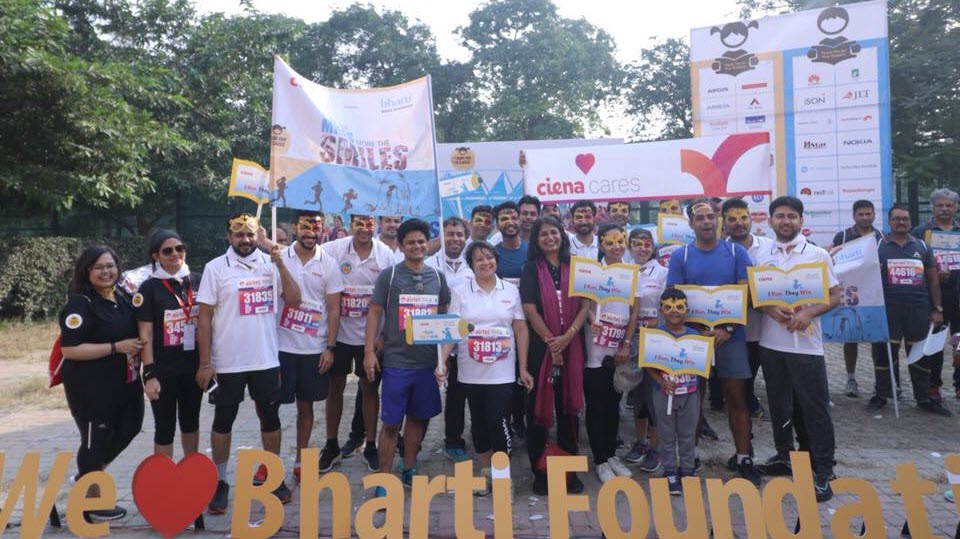 One year changes a lot. And India is just getting started.