How will Adaptive IP change your IP networks?

December 28, 2018
James Glover
Director of Packet Networking Product Management
Subscribe Subscribe to Ciena's communications
IP technology is the industry choice for emerging applications such as 5G, but the way IP protocols are delivered must evolve due to new and emerging use cases. Learn more about Ciena’s recently introduced Adaptive IP, and how it is providing the path for the industry to evolutionize.

Over the last several years, network operators have been searching to control costs and accelerate innovation, while avoiding heavily integrated solutions that lock them into a single vendor’s solution. This search has led to explosive growth and innovation in the “open source” software and hardware communities that facilitates increased choice for best-in-breed network solutions and services.

Disaggregation, programmability, and open Application Programming Interfaces (APIs) are together playing a major role in disrupting legacy network designs by shifting innovation from hardware to software. The software-based virtualization of network functions and services allow for improved scaling and flexibility via a new approach to designing, deploying, and managing network architecture.

Today there is a disruptive trend towards virtualization of applications, services, and disaggregation (separation of hardware and software) of infrastructure. Combine this trend with the never-ending need for bandwidth, scaling and flexibility in network deployments, and we see an entirely new approach to network architecture emerging. This force of disruptive change in the IP networking space has separated the IP edge router into a virtualized Broadband Network Gateway (vBNG), a merchant silicon-based L2/L3 switch, and an SDN-oriented control plane. It requires compute resources to be located further out on the edge of the network to help address the scale and services related to 5G and IoT applications. Operational costs needed to perform at scale must also be considered.

Disaggregation, programmability, and open APIs are together playing a major role in disrupting legacy network designs by shifting innovation from hardware to software.

The entire end-to-end network must be agile to enable compute, storage and networking resources when and where required by leveraging programmable resources that don’t require physical reconfiguration to accommodate evolving service demands. This has led to open source discussions around open APIs, such as NETCONF/YANG, routing protocol extensions and enhancements, path computation, remote procedure calls, and so on... but what about OPEX?

How can operators address costs that scale linearly alongside network scaling? Through automation and orchestration.

Learn more about our Packet Networking Solutions.
Automation quickly and consistently configures all network elements while eliminating human errors associated with change management. Orchestration is the execution of the operational processes involved in designing, creating, coordinating, and delivering end-to-end services. With automation and orchestration, network operators can optimize resources while improving consistency in deploying network services.

What is obvious is that IP-based solutions built upon a node level control plane approach are no longer the best path forward. As Ciena’s Scott McFeely explained, a new way of scaling and simplifying IP-based access to metro networks is required – one that is streamlined, virtualized, automated, and far more scalable. We call this new approach Adaptive IPTM.

So, what is Adaptive IP?

Adaptive IP is a solution that goes beyond the individual capabilities of a network element and builds upon programmable network infrastructure. Our intelligent automation implementation combines SDN-based orchestration with analytics. This allows operators to leverage deep network knowledge to power the automation of services and operations.

Adaptive IP is a Layer 3-oriented network architecture that does not start with the capabilities of a single box or collection or boxes. Instead, the design starts with a holistic, end-to-end mindset.

Network elements include functionality to detect and report network status by acting as sensors at points along the end-to-end service chain. This information is shared with network management and analytics applications. Based on ongoing analysis of collected data, adjustments are continually made to optimize performance of the end-to-end network. Adjustments are sent to network elements via standardized technologies, such as using NETCONF/YANG and routing protocol extensions. This forms a closed-loop systematic approach to network operations. 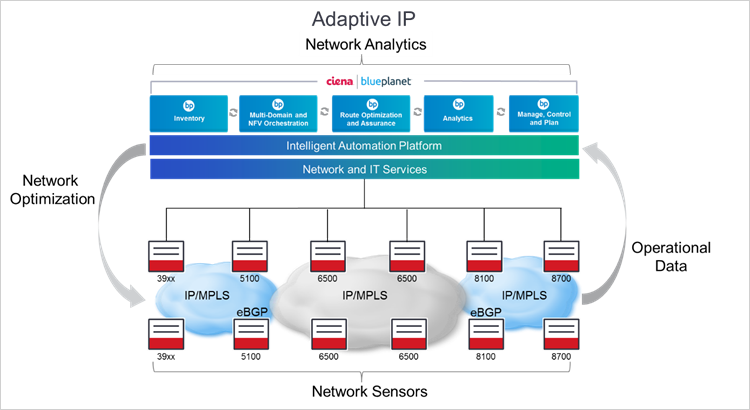 Adaptive IP is a Layer 3-oriented network architecture that does not start with the capabilities of a single box or collection or boxes. Instead, the design starts with a holistic, end-to-end mindset. Given the goal to be more scalable via an increased number of endpoints, there’s a desire to significantly reduce node-based control plane level signaling. In current IP/MPLS networks, each node runs a Label Distribution Protocol (LDP) to each peer router. Adaptive IP embraces a simpler, SDN-friendly approach that aligns to emerging concepts from the Internet Engineering Task Force (IETF) that reduces the number of legacy protocols and control plane signaling in the network.

The aim is to reduce which protocols to use in the programmable network infrastructure yet still support Layer 2 and Layer 3 services.

The aim is to reduce which protocols to use in the programmable network infrastructure yet still support Layer 2 and Layer 3 services. For example, Border Gateway Protocol (BGP) has been enhanced with extensions to fit this need, while other protocols, such has RIP (Routing Information Protocol), have be pushed aside.

By following open standards, Ciena empowers operators to pick-and-choose when and where to evolve their network infrastructure and services. Solutions are no longer tightly integrated proprietary systems; rather, they’re a modular, disaggregated set of functions that can be physical and/or virtual utilizing standardized protocols to interact with one another in a microservices-based architecture.

By following open standards, Ciena empowers operators to pick-and-choose when and where to evolve their network infrastructure and services.

As networks continue to scale, the amount of data collected coupled with a never-ending need for more bandwidth mandate a need to evolutionize. IP technology is the industry choice for emerging applications such as 5G, and the way IP protocols are delivered must evolve. It no longer makes sense to continue deploying large, complex, multi-purpose “god boxes” due to new and emerging use cases. The new mindset leverages cloud-like scale and disaggregation.  Operators need evolutionize the network to be more adaptive and efficient allowing for rapid service creation, deployment, and modification that maintains pace with user demands, including new optimized IP services and SDN/NFV readiness to address key requirements related to 5G and IoT.

There is a better way!

Ciena addresses this need by leveraging network orchestration and automation alongside streamlined IP protocol support targeted at specific use cases, such as 5G. Innovating and acquiring technologies to drive the Adaptive Network™ vision began with challenging and addressing traditional Layer 0 network mindsets with the introduction of Liquid Spectrum. We’re now challenging traditional IP network thinking via our Adaptive IP solution that embraces a SDN-oriented future of networking that provides a bridge for existing IP networks to partake in this evolution and to intersect the future direction of networking.

What’s in your IP network?

Leapfrogging Toward The Network Of The Future