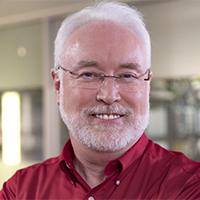 Ciena’s Senior Vice President & CTO, Steve Alexander, details how Edge Cloud will drive new revenue opportunities for not just network providers but also hyperscalers in India and will usher in an era of high-performance autonomous networks.This article was originally published on Communications Today.

Article
Q&A with Ciena India’s Ryan Perera: Discussing the Indian telecom landscape
The year 2020 has been transformational in terms of realizing India's digital aspirations. The COVID-19 pandemic not only accelerated the digitization of the enterprises but also led to a massive surge in several online applications like online education and telemedicine.

Predictably, several of these changes are likely to continue even after the pandemic. The year 2021 promises to be the tipping point of such initiatives since networks have already started showing signs of congestion, which could throttle the progress achieved so far. Network providers in India need to focus on faster connectivity even as 5G deployments are around the corner.

But instead of waiting for 5G license rollouts, telecom operators are utilizing the existing investments to make networks faster by deedploying automation and building out the edge and getting data centers closer to the consumer.

The investments in Edge Cloud are set to pick up pace in 2021. Indian network providers, similar to their international peers, have realized the need to build out edge infrastructure in these smaller data center sites, leveraging Edge Cloud capabilities. The same edge sites will help network providers deliver on the promises of 5G.

Network autonomy to become a baseline

The government's commitment to the Digital India initiative is gaining momentum. Further, there has been an increase in smart city deployments, online gaming, and industries like manufacturing adopting new technology concepts such as Augmented Reality (AR) and Virtual Reality (VR). These services put immense demand on the network, which means the networks have to rapidly adapt to meet the evolving needs of users.

We’re also seeing Indian network providers leveraging software and analytics to automate and redefine how they engineer, operate and monetize their networks. Analytics software helps network providers monitor their entire network and track the network's health through real-time link performance metrics. It also gives them the ability to mine all available network assets to instantly respond to a sudden surge in bandwidth requirements and immediately allocate capacity across any path in real-time.

White Paper
The Adaptive Network: A Framework for Understanding the Networking Implications of the Edge Cloud

Digital inclusion will pick up pace

India has one of the world's largest optical fibre connectivity programs, Bharat Broadband Network Limited, but depending on that alone might not be enough. There will be a growing need to enhance rural connectivity and build digital inclusion across India. With growing dependence on the network, the quality of service will gain even higher relevance. Therefore, the government will look beyond the big bang projects and consider investments to solving the last mile challenge in rural connectivity.

Augmented and virtual reality to get real

Large technology firms and startups are all betting on various immersive applications. Perhaps one might come out as the killer use case for 5G. However, what remains unchallenged is how enhanced reality (AR and VR) are expected to take a giant leap this year.

A significant shift will be adopting AR and VR in commercial and industrial applications instead of just consumer-centric services. The use of AR and VR will not only enable new ways of working but will drive new use cases like immersive education and so on.

Using existing home broadband or 3G and 4G networks won't deliver the desired results that are expected from these enhanced reality deployments. What will eventually open up these services for commercial deployments are 5G networks which are forthcoming in India. This will take AR and VR beyond the buzzwords and turn them into viable and valuable service offerings.

Stronger ties between hyperscalers and telcos for improved cloud experience

All major hyperscalers are betting big on Edge Cloud. However, instead of competing with telecom carriers, 2021 will see these hyperscalers cozying up with the telcos to tap into the Edge Cloud opportunity jointly.

This is being driven by the fact that networks are increasingly becoming software-centric, offering an opportunity to improve the delivery of new services and applications to the users.

With 5G and new technologies on the horizon, the year 2021 promises to be a disruptive one!

Despite the Covid-19 pandemic, 2020 turned out to be a good year for the Indian telecom network...

India, the world's second largest country in terms of population and internet users, is set to...

Article
Three reasons why 5G is more relevant than ever

5G has never been as relevant in India as it is today. With the surge of people working,...

Rajesh Nambiar, Chairman and President of Ciena India, discusses how the network requirements of...

5G provides great opportunity for India’s economy and society, there are gaps to close from...

What goes into a 5G network that helps maximize return on investment, and is built to last? Ciena...