India is emerging as a key hub for public cloud-based services in Asia. This has opened the door for telecom operators to play a critical role in India's growing public cloud market. Ryan Perera, Vice President and General Manager, Ciena India, talks about the current state of India's public cloud market, the importance of the 'platform economy' for India's telecom operators, and the role that fungible pools of 'distributed cloud computing'  will play in India's telecommunication ecosystem. This Q&A was originally posted on ETTelecom.

What is the state of the Public Cloud market in India?

India is emerging as a key hub for public cloud-based services in Asia. India’s public cloud market is dominated by three webscale players: Amazon Web Services (AWS), Microsoft Azure, and Google Cloud Platform (GCP). Boston Consulting Group (BCG) values this market around USD $3 billion in 2020, and estimates the market to grow by 25% CAGR to USD $8 billion by 2023. In our perspective, India’s public cloud infrastructure includes regional data centres owned by webscale players, as well as more than 100 others distributed across the country, that are either network-neutral data centres or owned by telecom service providers.

Webscale players’ forays into such networking and telco solutions are mainly driven by the promise of 5G. When I speak to customers and others in the industry, it is widely believed that the next battleground for webscale players is 5G. For example, Microsoft recently made their intentions clear with their acquisitions of Affirmed (vEPC, 5gc) and Metaswitch (vIMS). Google Cloud Platform announced their three-pronged telco strategy that focuses on monetising 5G edge computing solutions, reimagining the customer journey with data and AI, and subsequently helping operators improve internal operations efficiencies. Google Cloud Platform is also extending their Anthos hybrid multi-could platform to support telecom operators.

Telecom operators in India have also started their own ‘telco cloud’ journey. Although these efforts initially were started to support their own internal network function virtualisation (NFV) initiatives, these operators now see a big opportunity to play a critical role in the delivery of cloud services in India as well.

What are the roles of webscale players and telecom operators in ‘edge computing’ in India?

As digital services for various vertical markets expand with applications where latency becomes critical for cloud computing services, it is only logical to also bring compute closer to where the data is generated. Hence, we’re seeing a surge in interest for edge computing across the world, including in India. India’s leading ‘edge use cases’ are likely to be media processing, telemedicine, video surveillance, manufacturing, and a myriad of immersive applications such as AR/VR and gaming.

All three leading webscale players have launched their edge solutions – Azure Stack; AWS Outpost, Wavelength, Local Zone; Google Anthos – which cover on-premises colocations with telecom operators and private zones. It is expected that many of these edge offerings could be commercially launched soon in India in partnerships with telecom operators.

Telecom operators are expected to enter into strategic partnerships with multiple webscale players. For these operators to deliver the low-latency services promised by 5G and edge computing, close partnerships with the webscale players will be needed, so they can monetise ‘connectivity’ as a platform to broaden and enhance their competitive advantage.

What is the importance of the 'platform economy' for India’s telecom operators?

Despite massive capital investments in 3G and 4G, pressures on average revenue per user have resulted in no meaningful profitability returns to date. 3G and 4G deployments in India have instead been more about capturing and holding onto market share to later monetise. Fortunately, 5G promises to deliver more than just higher speed connectivity. This is pushing telecom operators towards reinvigorating a ‘platform economy’ for the business ecosystem, to better monetise their investments. Bundling of services has not proven profitable during 3G and 4G eras, so rather than pursuing that as a strategy, you will see telecom service providers offering differentiated 5G services priced at different levels.

According to Artificial Intelligence Index Report 2019 by Stanford University, insatiable demands from both consumer and business sectors are doubling “compute” requirements in less than every 4 months. Therefore, compute processing and storage capacity can no longer keep up with Moore’s Law. Amidst this growth, ‘Connect Networks’ are expected to play a more critical role than ever before to efficiently use compute processing resources. For example, tightly coupled distributed computing across a set of edge data centers in the metro network, with well-engineered connectivity, has the promise to deliver ‘fungible pools of distributed cloud computing’ to meet webscale players’ edge cloud service capacity and performance metrics. This is good news for telecom operators, who can now enable the right type of connectivity for edge cloud service needs.

Telecom operators have a great opportunity to put their strengths to work by monetizing quality of experience in ‘connect platforms’ by way of Network Slicing, coupled with new consumption and charging models.

While the concept behind network slicing is not new, it is to be understood as the ability to custom fit network connectivity to application needs over a common shared network. Recent technical advancements – specifically the advent of Segment Routing (SR), cloud-based controllers and open platforms with APIs for webscale players and application providers to collaborate in a business ecosystem – have made mass implementations of network slicing possible. For example, currently, a service provider might approach monetization as a single connectivity model simply based on speed, up-time, or both. In the future, this same service provider could enable a matrix of API driven platform slices to meet a few different application requirements and target quality of experience. The set of monetization options could be, as example, four slices and with on-demand or schedulable time windows. 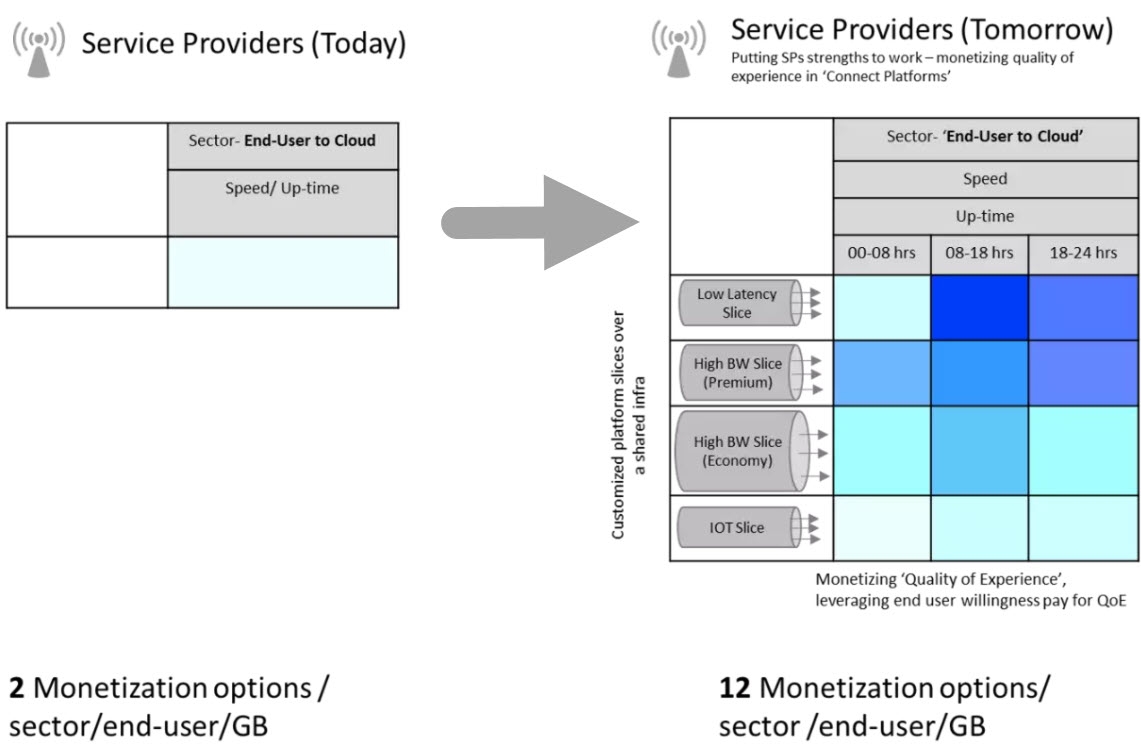 Preparing for 5G: Focus on Fiberisation