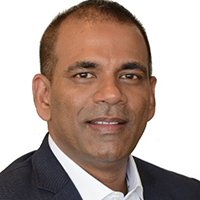 India, the world's second largest country in terms of population and internet users, is set to start its 5G journey in the coming year. Contrary to popular perception, wireline technologies will play a crucial role in next generation of mobile networks' ability to meet India's unprecedented demands for capacity, speed, and mobile broadband. In this article, Ciena India's Vice President and General Manager, Ryan Perera, outlines three wireline network improvements needed for 5G. This article was originally published in Communications Today.

India has witnessed an unprecedented increase in the consumption of mobile broadband, including video, IoT, and cloud-based services, in the last few years. The ever-increasing numbers of LTE subscribers and the growing popularity of video have led to unprecedented surge in data usage. The government is also adopting a number of initiatives, like Digital India, leading to an increase in the consumption of broadband. In fact, India is now second only to China in terms of internet users, according to Internet and Mobile Association of India (IAMAI).

Our country is set to start its 5G journey and plans to hold a spectrum auction in the coming year. 5G technology facilitates ultra-low latency of less than one millisecond and super high-speed mobile broadband and is sure to fuel the growth of mobile broadband consumption in India.

The wireline infrastructure residing in data centres must be ready to support more than 1000 times the data currently flowing through it.

Preparing the network for 5G is going to be very different from previous standards. 5G is not just about changes in radio access networks – it calls for a paradigm shift in the way networks are set up and managed. Contrary to popular perception, the next generation of mobile networks demand a lot of support from wireline technologies.

The wireline infrastructure residing in data centres, that connects end-users (man and machine) to access content, must be ready to support more than 1000 times the data currently flowing through it, and in India, the wireline networks leave a lot to be desired.

How can wireline networks be modernized to meet the requirements of the new age? There are three areas of the network which need to be upgraded to meet new requirements: scalability, virtualization, and network slicing.

5G technology is characterized by extremely high speeds. Massive amounts of data will be produced by IoT sensors, autonomous vehicles, and other applications. The bandwidth required in wireline networks needs to increase many times over to handle the exponential growth in end-user traffic.

Wireline networks need to be easily scalable to efficiently handle the growth in traffic. Fiberization of the networks will be required to prepare for the new and exciting technology concepts, such as smart cities, virtual reality, augmented reality, and more. Furthermore, service providers can also look at automation and move toward a software-centric and virtualized network to make networks more scalable.

Virtualizing the network for agility and flexibility

Virtualization of radio access networks (RANs) will play a crucial role in bringing down the cost of setting up and managing a 5G network. With virtualization, it will be possible for service providers to reduce cost by simplifying the functions of a cell tower by moving the more sophisticated data processing functions to a central location. The centralized location can then complete the data processing function to ensure better CAPEX and OPEX efficiencies which allows for the disaggregation of the software and hardware components of the network.

With 5G network slicing, many innovative use cases will now be possible. With this approach, service providers can meet different and varied requirements for latency, bandwidth, and reliability for different services from the same physical network. It allows them to virtually divide the network into many parts which can be managed independently as per the different requirement of that particular service.

Service providers can prioritize the network usage with network slicing. For instance, in the case of a disaster, first-responder networks need to be given priority so they are able to carry out rescue missions without network problems. Network slicing allows mobile network operators to guarantee connectivity to them by prioritizing their traffic over other traffic, like social media updates.

As we prepare for 5G, now is the time for service providers to examine their network strategy and consider improvements to wireline infrastructure. The future of Digital India will be realized, and new opportunities will be unlocked by 5G and the underlying infrastructure upgrades that support it.

Despite the Covid-19 pandemic, 2020 turned out to be a good year for the Indian telecom network...

Article
Three reasons why 5G is more relevant than ever

5G has never been as relevant in India as it is today. With the surge of people working,...

Rajesh Nambiar, Chairman and President of Ciena India, discusses how the network requirements of...

5G provides great opportunity for India’s economy and society, there are gaps to close from...

What goes into a 5G network that helps maximize return on investment, and is built to last? Ciena...